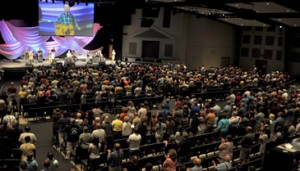 Uhoh.  The “e” word.
I’m going to try and tie this week’s reflection in with how I left the last week because I think one of the keys to understanding evangelization.

In my early years as an activist, we had encounters with and had to deal with recurring incidents of fundamentalism, and in many ways, I think because of those encounters and the kinds of encounters a lot of queer people have with religion, we get the understanding or idea that religion tends to be a negative thing, that it’s not something compatible with a queer calling, and like the stance of many Christian denominations, it’s ok to be queer provided you don’t act on your impulses.

I don’t know about you, but any friend I had who was disinterested in me wasn’t a friend for long. One of the key aspects of a friendship is interest!

When I made the decision to investigate becoming a religious in a Catholic community, I made the choice with the understanding that up to that point as someone who was practicing Roman Catholicism as an unbaptised outsider who wasn’t willing to enter a physical church building specifically because of the catechetical teachings on same sex attraction. I had to hedge a bet that, in hindsight, probably wasn’t as big of a bet as I had initially thought: namely, bet that this teaching about gender and sexually diverse people was not on the mark, and that by following my call in an Independent Catholic setting I wouldn’t be barring myself from entering the Kingdom.

NASA will soon be launching a brand-new telescope to replace the Hubble Space Telescope which is reaching the end of it’s life. A few years back, Hubble was pointed into to ‘blank’ patches of space and took photographs of what was there. What turned up was an image of what at first appeared to be a star field, until they realized that what they were looking at weren’t stars but actual galaxies.

Put this into perspective. Next time you’re in the country, look up at the sky and pretend that instead of stars you’re looking at galaxies. Each galaxy containing hundreds (thousands? tens of thousands?) of stars with planets with the potential for life. Now, consider the Catholic cosmology that says God created this. All of this. Consider the theology that says God is sentient and aware of every atom in this creation.
You’re going to tell me that God didn’t know what God was doing when God made gender and sexually diverse people?

But where does this put us in terms of what evangelization is about? There are two paths that must be looked at. The first is how we share within our own communities of queer people given the context of pain, suffering, and ostracizing that tend to happen in most mainstream congregations with GSD people. There’s a misquoted saying attributed to St. Francis that goes, “Preach the Gospel at every opportunity, use words when necessary.” Even though it’s a misquote, it rings pretty true. In our own communities, this means approaching people who feel that we as GSD people have marginalized or continue to do so. Our siblings of colour, our trans siblings, people who find themselves at the end of gossip or criticism because they don’t necessarily measure up to what we hold as the stick of perfection in terms of activism, or what a body should look like, or how a person should dress or talk, or someone who’s suffered because of addiction or mental illness. Our evangelization as queer people has to begin with our own community and has to reflect how we treat the members of our own community.

But having done this or entered a state of change and learning to accomplish this, we have to come to terms with a very hard reality. Christ said, “Truly I tell you, whatever you did for one of the least of these brothers and sisters of mine, you did for me.” (Matthew 25:40) When we think of least, who do we think of? Do we think of people who have the outward appearance of poverty, someone who meets our idea of someone with less than what we have? I think these are the kinds of people our Lord was talking about, but there’s the uncomfortable reality also that people who are poor in acceptance, poor in having an open mind, people who are locked in the law and lack compassion, are these not also the poor? I’m drawn to think about the fundamentalists I encountered in my early years as an activist now, but I’m also drawn to think about people who’s political and social views are extreme. And as difficult as it is to accept, the people who would denounce queer people as being sinners are also the poor.

The idea I want to propose is this: instead of spending time trying to justify our presence in the church as queer people, let’s accept that we are a part of the church with the blessing of God the Father, the Son, and the Holy Ghost, amen! Let’s instead approach the people who vilify us as the poor. They come to us bearing gifts of anger and hatred (yes, gifts) that will help us to really understand the suffering our Lord experienced. This means practicing radical compassion when it would be so much simpler to practice conventional anger. It means not taking an eye for an eye, but truly understanding what it means to turn the other cheek and to love your enemy as your neighbour, as yourself.
This is what it means to be a Christian in a gender and sexually diverse context.