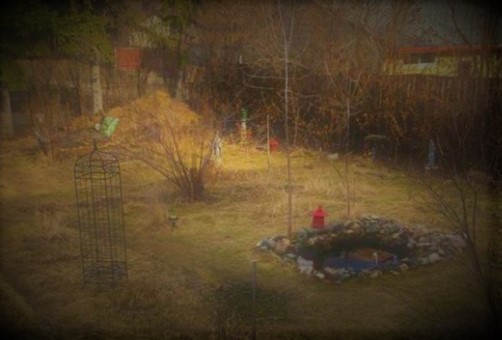 I can’t remember how long it’s been since I looked out of my window into my yard and heard birds over traffic.

I knew I was going to have to do something about the garden since about February.  Through a combination of events, I’d gotten to a point where I felt burnt out and wasn’t able to care for it the same way I’d done in the past.  But there was something amazing about what happened–the grasses grew tall, went into flower:  little tiny white, yellow streaks with tear drops waving in the wind.  Pasture sage grew tall given the moisture and freedom, blooming in bundles of yellow.  When I took the plants down this week-end, they smelled like the spice cupboard, and already new silvery lace leaves are starting to sprout anew.  Where I’d planted clover to try and take over the lawn, no clover grows.  But I know that there will be multiple clovers springing up at the base of the perennial bed in the back, giving white and pink cluster flowers in the middle of the summer, bringing bees in.  Canola sprouted randomly in places, grew tall and shone yellow in the summer breeze.  I didn’t mind that nature had taken over the vegetable garden, that mint was spreading everywhere.  To me, it felt like I was embracing what was being dictated to me by the space, and I was ok with it.

While I recognize the beauty of a garden like this, it still requires care and attention.  There are still perennials I need to take care of; the thought crossed my mind to slowly dig them up and move them into the rich, garden soil.  The thought crossed my mind to fill the vegetable garden with sunflowers, or petunias.  I considered and decided to mow everything.  Unfortunately, a concord grape that I’ve been growing for six years got mistaken as a piece of grass.  I laughed and kicked myself.   It’ll have to start over again.

I’ll be more strict with mowing the paths this year.  As it grows over, it becomes challenging and unsightly, difficult to walk through.  But I fully intend to let it be natural as I had by accident last year.

Container gardening this year might produce vegetables.  The raised garden will probably give enough tomatoes to last through the year.  Herbs in the clay pots that didn’t survive over the winter will be again replaced with an eye on what gets used frequently in the house.

I haven’t prayed in the garden yet.  Not like I did last year praying the Office in my chair, but I feel that season coming back as well.  It’s strange.  Just a few months ago the excitement of my ordination was on me, and then just as suddenly the trip my mom and my fiance were going to take was over before it began.  The rush to finish my classes slowed.  I finished a paper on spiritual direction yesterday, the last three papers that I will tackle will be on the rubrics of the Tridentine Mass, my practicum paper, and a final thesis paper.  It’s like everything has somehow moved into slow motion, and yet time seems to fly faster than I recall.

I’m out in the community every day.  Not for very long, not visiting with people for any more than five or ten minutes.  I see people in poverty that have to continue to look for change.  But worse, I see how people in my community are not following the protocols to keep us all safe.  People are hopeful about the opening up of the province, and I’m hopeful as well but cautiously so.  And asking questions, big questions, about our society.

When I was walking the dog today, I was thinking about how different it was for me just a few years ago, how thinking in terms of right and left was easy, and how choosing right was so simple because it meant saying that everyone was entitled to a good life provided they worked for that life.  I had no idea what privilege was.  I was protected from those ideas by people who needed me to support their privilege.  I believed what they told me.  I chose the lie of privilege because it gave me certain things that I enjoyed.  Mostly, it gave me a sense of entitlement, a sense that because I was who I was and did what I did, I could very easily say what I did about people that didn’t work, people in poverty, people in addiction, people with mental illness.  The pandemic only underlined that sense.  The other day I was grocery shopping and was very keenly aware of people who either chose not to follow protocols, or were  blind to them–maybe out of denial, maybe out of stupidity.  Today when I woke up, I saw pictures of someone I know who is in ministry, celebrating their birthday over the week-end with family.  A lot of family.  As a pastor and a life coach, how does that look to the rest of the community?

Privilege is not invincibility.  Being angry about it, and yelling about it,  does not make you less vulnerable to a virus.  And where people of means can make the choice to disregard social distancing restrictions, people in poverty don’t have a choice and have to go out to look for food.  If they have a substance misuse problem, they have to continue to go out and try to get the money for the next hit.  So many people tweaking in the stores after eight at night, and probably no one recognizing it.

As a support worker, I’m frustrated by what I see because it underlines the selfish nature of humanity, and how we have constructed beliefs to justify that selfishness.

As a religious, I’m pushed into the analogy that these times in many ways force us into the desert.  In our isolation, in the quiet we may hate, in the solitude we may suffer in, we are forced to confront the prickly part of ourselves that tells us to bend the rules just slightly.  In my 20’s, I had opportunity to be in solitude in the wilderness and confront temptation.  It was so subtle, it crept in like a mouse, stepped into me and started to whisper:  You can’t do this anymore.  You’re hungry.  You’re thirsty.  You’re weak.   It was an external force I reflect on now very keenly given our circumstances.  I am challenged daily to reflect, to go into prayer, to seek God’s presence and ask in humility for Jesus to walk with me throughout the day, because I have done days without Him and they are horrible.

I’m grateful I have purpose in being a support worker, in being able to still see, even though briefly and from behind a mask or a telephone, the people that I care about, the people I work with.

I’m grateful for my dog.  I never realized how well dog’s could read psychic situations and respond to them.  She’s at my feet today because I’m here.  She’d be at Dan’s feet if I wasn’t.  She knows we need her right now.

I’m hoping that climate scientists have been looking at the world without fossil fuels.

I’m hoping that people will respect safe practices, especially people who are models for others and should know better than to break them.

I’m hoping that this will be over soon.

Gardening, Pandemics, and Other Random Thoughts