(In which I speak about the choices for Grand Marshal this year, activism, and why anger kills any hope of change.) 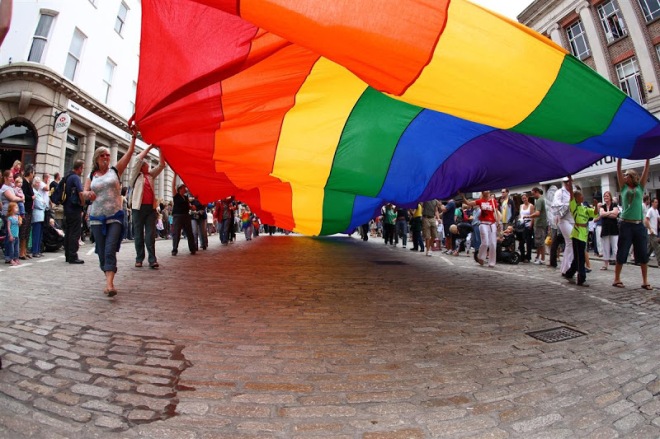 Many of us have a misunderstanding of what humility means, and especially during the month of June when we actively celebrate Queer culture-this is supposed to be the time of the year when we stand up and say it’s ok to be who we are, it’s ok to be open about who we are, recognizing the struggles from whence we came, the progress we as a society have made, the progress we as a community have made.

It’s also a time to take stock of what we have, what we need to address, and how we can move forward.

When I was very, very active in the Pride movement in my twenties, I remember a lot of different feelings.  I remember being challenged to be present and visual where I had once been absent and hidden, courageous in fearful situations, confronting aspects of society that would not allow us to be who we are because doing so creates a sense that the fabric of society, a fabric that is perhaps woven poorly to begin with, was coming apart.  I experienced a euphoria, a rush, a strength that was driven with anger, with pride, with comradery of people who felt as I did, people who looked up to us because of who we were and what we did.

Now, almost twenty years later, I find myself once again wanting to engage in the Pride movement, except I feel a lot older, and probably just a little more experienced.  I sat in on a training workshop this past Sunday where there were people in their early to mid teens getting ready to volunteer.  It blows my mind how young people are, how willing they are to get involved.  Things have changed a lot.

They’ve changed in that there’s new pronouns and ways of expressing sexual and gender identity.  Keeping up with everything is a sure way to stay humble, because where once I thought  I knew just about everything I thought there was to know, I now find myself having to relearn the paradigm.  It’s not a bad thing because it reminds me that even at forty six, I still have lots to learn.

What I find the most challenging to being humble is the way anger acts like a stone in my shoe.  Here’s a great scenario from the garden.  I go out to weed.  I know I have to weed because even leaving grasses and wild plants, you have to make room for the perennials to have nutrients and keep up.  So I start to pull.  And then I look out at the field of dandelions, quack grass, and I start to get angry with myself for letting it go so long.  I pull weeds a little slower.  I get more angry with myself.  I stop pulling weeds all together.

I have successfully talked myself out of pulling weeds because, in reality,  I didn’t want to pull weeds to begin with.

Anger is the greatest opponent to humility.  I have watched as people in the last two years that I have been aware of the comings and goings of the gender and sexually diverse community have acted out of anger, sometimes rage.  I don’t think that this anger or rage isn’t justified.  But I’ve watched as potentially great future leaders in our community have become crippled in the effectiveness of their activism because they allowed anger to dominate the motivation of their actions.

Humility is not a negative virtue.  Humility when balanced with pride allows people to see the full picture without getting so deeply involved.  It acts as a kind of buffer between the action and the reaction that usually gets a reacting.

Humility allows for people to be able to admit when they were wrong, and to be able to accept the consequences.  But it also allows those who have been injured to see that the one who was behind the injury is suffering themselves.  Humility is, I believe, the beginning of communities understanding how interconnected we are, how in reality defining the boundaries of community actually makes us more stagnant and limits our own potentials.  When we create a closed system, we further allow for greater fracturing within that system, until at last we are weak because we are no longer united

Great example here is the current grand marshal choices for this year’s parade.

On the one hand, (Aids Programs South Saskatchewan has been celebrated for the work they are doing in our community, yet the second choice Jon Ryan has created anger and  hurt in our community.  The voices say that a member of our own community should’ve been chosen over a cis-gender white male.

We as a group of communities need to be very, very careful.  We are entering into a situation where we, as groups who have been oppressed or ignored for decades, can very easily become the individuals we were and have been fighting.   Where we were once calling for tolerance and tearing down walls, we are now in the very difficult position of potentially acting outside of tolerance, of building walls ourselves.

A healthy system is one that is diverse.  Diversity cannot exist without humility, the humility of accepting that walls and anger are symptoms of fear, that fear cannot create healthy change that lasts.  Queen City Pride and the Regina Police Service are co-operating so that officers can participate in the parade without wearing uniforms.

The problem has been band-aided.  Now what’s going to happen to help people deal with the causes of the fear?  Who’s going to sit both groups down, the police and the marginalized, so that people can speak and be heard?  Who’s going to take the step out of anger into humility to step into reconciliation  rather than walking away from the problems, justified by rage?

Best line ever from “Rent”:  The opposite of war isn’t peace, it’s creation.”

Humility is the foundation of all the other virtues; hence, in the soul in which this virtue does not exist, there cannot be any other virtue except in mere appearance.
-St. Augustine of Hippo