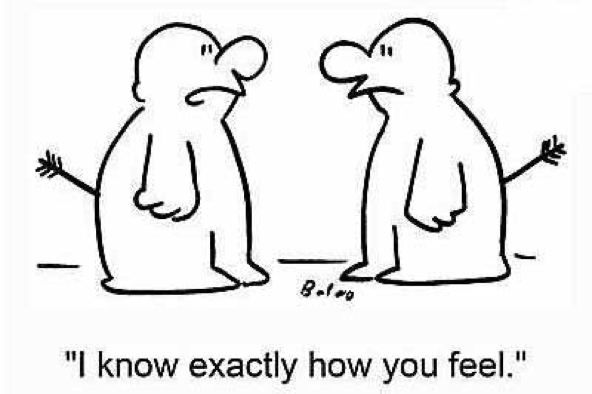 A few weeks ago, a podcast that I subscribed to dealt with a passage from 1 Corinthians that goes something like this:

I listened to the commentary about how this was a slightly uncomfortable passage of scripture because it conveyed the idea that Paul was ‘recruiting’ and taking on the roles of so many different groups of people to find converts.  It wasn’t until I saw it in this context today that I realized just how profound Paul’s words are.  Paul isn’t acting in a subversive under cover manner, he’s trying in his own experience to relate to people in other communities to try and bridge the gap, try and create dialogue.

Empathy is a challenging virtue for us because it forces us to delve deeper into personal experiences that we may not want to relate to.  In order to really understand how someone else feels, where someone else comes from, their walk, their life, we have to first approach how we create those barriers that keep us from interacting with people who are different.

Case in point is how people here in the Trans community are often mistreated, or treated with less than the same dignity and respect that other members of other communities are treated.  A recent event comes to mind about how a trans person was harassed in our local bar.  When a complaint was made, the staff simply served another drink to the individual who mistreated the trans person.  Other incidents I’ve been made aware of include people singling out trans people as not being full members of the community, or not being able to be full participants in things like the feminist movement.

When we consider moments in our lives where we were marginalized because of how we identified, we begin to take the first steps into what empathy is about.  Knowing what it feels like to be marginalized is one thing:  actually stepping into the line of fire where you have to interact with that marginalized individual is something else.  We have very comfortable buffers that keep our uncomfortable moments at bay:  texting, social media, social norms, personal standards, and our fears; all of these things act to preserve the integrity of our prejudice, the integrity of those things which keep us safe.  True empathy requires being and behaving in an uncomfortable manner to cross the space between what we are comfortable doing and what the right thing to do is.

In my own experience, empathy had to begin when I tried to find reconciliation between that part of myself that was called to fulfill my religious vocation, and that part of myself that knew in doing so I had to find a way to honour my queer vocation as well.  For many people, these two things are completely incompatible and to try and reconcile them is nothing more than a dishonouring of millennia of established tradition.  Right now, the majority of that anxiety and fear hasn’t manifested in any actual interactions, but the possibility of it has created a condition of fear in my being that makes it important for me to find situations where I can challenge that fear, where I can ‘cross the road’ from where I’m safe to where I might encounter other people.

But most importantly, empathy is something that has to be developed, nurtured, and taught if we as a community of communities are going to move forward.  We have to begin to move past a way of conducting our activism and advocacy that doesn’t include the fear or the need to find blame.  We as queer people have a unique perspective on what it’s like to be afraid because of who we are.  Rather than buy into the fear that protects us, it’s our responsibility to take the bold steps to apply this to our fellow communities, and the greater human family.  The hardest application is to the people who literally hate.  In their hate, we have to look within ourselves and find common ground, a common beginning that will surely look like being afraid of loosing something, or being left behind, or being less valued.  It is a generational project that has to begin with a mature, courageous people.  It has to begin with stepping into a role of stopping gossip when it happens, of asking questions that help to diversify our experiences, of listening when we communicate rather than trying to talk over people.