“Take courage, be stouthearted, wait for the Lord!”  -Psalm 27

I’m sitting in a cafe in Moose Jaw.  Today should be a relaxing get away with my boyfriend, and right now I should be writing the blog post in a relaxed, contemplative stance.  Instead, my stomach is queasy, I feel jittery, and my anxiety level is elevated.  All of this because of a phone call I received just as we were pulling up in front of the cafe.

I went from a position of relative comfort and security to having the carpet yanked out from underneath me because something that was expressed in confidence was shared.  The trust I’d felt is gone, the security in the situation I had expected to hold onto has vanished because what I had shared was used as a form of leverage by another person.

When I look at courage and the relationship I’ve had with courage in my life, I have to say in honesty that I can’t actually recall knowing courage, or seeing moments of courage, that felt confident or strong or familiar.  Courage has always been a kind of strange fog that people talk about, that people use as a form of encouragement, but in terms of the scale of emotion people feel I’m not sure it’s something that’s actually a tangible emotion.

Venerable Archbishop Fulton J. Sheen talks often in his discourses about the night when Our Lord entered into the garden, the first step of the passion.  Jesus spends much time in prayer, in contemplation, but this is the first time that we are party to an intimate moment of prayer between Jesus and God.

Going a little farther, he fell with his face to the ground and prayed, “My Father, if it is possible, may this cup be taken from me. Yet not as I will, but as you will.”

Sheen talks about the blood pouring from Jesus’ skin, falling on the roots of the olive trees in the garden, forming the first Rosary of Redemption.  Christ, falling on the ground in the garden in prayer, is afraid of what is to come, accepts the growing potentiality of the Passion, and still asks that it might pass.  And yet, even in that moment of fear, that moment of anxiety, He accepts that this may be his fate, that this may be will of His Father in Heaven.

I’m drawn back to my own point in the present moment, the way that I experience time; the past behind effecting how I feel, think, behave, the present that is literally a point and at the same time not, and the future before me looming like a great lake full of fish called “what if’s”.  What does courage have to do with any of this?

Courage isn’t an action that causes or is affected by change.  Courage is a condition of acceptance that includes, and must include, fear to some degree.  It isn’t a way out of being afraid, it’s a mode of behaving that attempts to scale back the emotional consequences of being afraid that we might do the right thing.  St. Francis standing in front of the bishop of Assisi must have felt some fear when, removing all his clothes, he stood naked before the Church, returning to his father all worldly possessions.   Any time anyone comes out of the closet, they have to embrace fear and move forward because the life that exists after coming out promises an improvement–or to put it another way–there cannot be an Easter Sunday without there being a Good Friday first.

I have no idea what the future holds fore me.  I know that I have dreams that include my vocation.  I’d love one day to be able to serve the LGBTQI Community as a pastor, as an advocate, as a counsellor, as a confessor.  I also know that what I want isn’t always what the Lord wants.  “Yet not as I will, but as You will.”  But in the end, it’s not I that determines the time and the place, or the method of the passion I am to undergo.  What I am left with is the reality that I must sell all that I own (let go of everything I possess emotionally), be chaste in my faith (not indulging in the passions of fear, anxiety, anger), and trust that God will steer me where I need to go (in obedience). 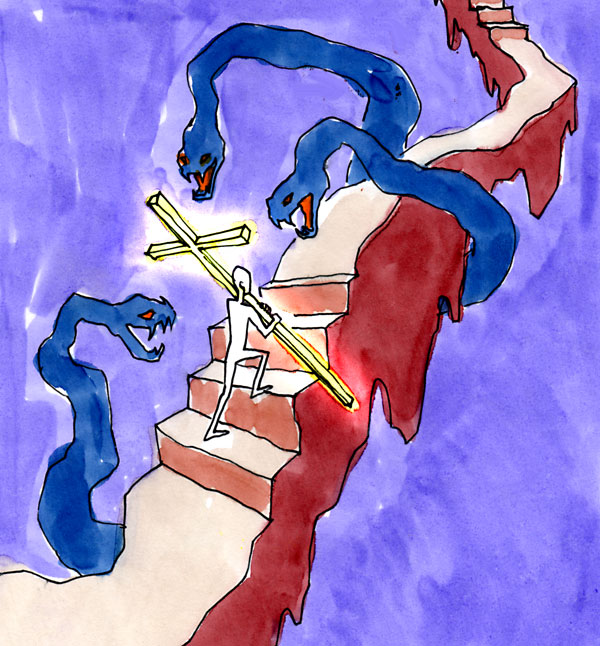